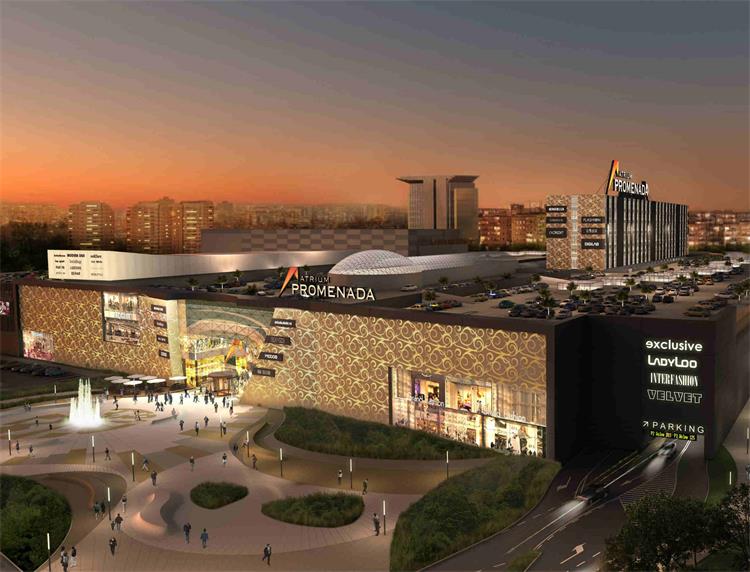 It was the only entry from Central and Eastern Europe. A key driver of growth has been professional shopping centre developers, which entered the Polish market via Warsaw in 2000, building modern urban entertainment centres in the capital such as Galeria Mokotów, Arkadia and Zlote Tarasy. As a result, international and domestic retail chains chose shopping centres rather than the traditional high streets for expansion.

‘People prefer shopping centres due to their complex offer, comfortable and safe shopping, and as places to spend free time with families and friends,’ explains Dominika Jedrak, director of research at Colliers.

BRIDGEHEAD FOR RETAILER EXPANSION
With a total retail stock of 1.69 million m2 GLA (including 1.18 million m2 in shopping centres), the
Warsaw agglomeration is the largest retail market in Poland, says Anna Wysocka, head of retail agency at
JLL Poland. It also remains the bridgehead for foreign retailer debuts and expansions in Poland, especially
for those looking for prestigious locations.

‘With the highest purchasing power in the country, a large population and relatively low shopping centre density (538 m2 per 1,000 inhabitants), the nation’s capital is set to see further development of the sector,’ adds Jedrak.

New developments in the Warsaw agglomeration include Galeria Wolomin, Galeria Legionowo and two
extensions to Atrium’s Promenada – and there are still underdeveloped areas for potential new retail locations.

Around 558,000 m2 of retail space is currently under construction, according to CBRE. ‘The total new supply in 2017 is expected to be about 20% higher than in 2016, taking into consideration only those projects currently under construction,’ according to Agata Czarnecka, associate director in the research and consultancy department at CBRE. ‘Owing to growing competition from new projects, which are being upgraded to modern market standards, older schemes are expected to undergo significant changes in the next few years,’ she adds.

ABOVE-AVERAGE PURCHASING POWER
Moderate market saturation, above-average purchasing power per capita and the dynamic growth of the population suggest that Warsaw has the power to attract new investors and brands. ‘Warsaw is a market with the greatest shopping potential and the savviest group of clients,’ says JLL’s Wysocka. ‘The Warsaw-based client follows the brands and fashion trends and does not require additional education in this area. Therefore, Warsaw remains the bridgehead for debuts and expansions in Poland for many foreign retailers, especially those looking for prestigious locations.’

About 136,000 m2 of retail space currently under construction is scheduled to be completed in the next two years. Around 13% of total Polish shopping centre stock is located in Warsaw.

WARSAW HAS LOWEST RETAIL VACANCY RATES
The Polish Retail Research Forum has revealed that at the end of 2016, Warsaw had nearly 1.5 million m2 of GLA and the lowest vacancy rates in Poland (1.9%). The trend to redevelop and extend older retail schemes is continuing, including the extension of Atrium Promenada. The two largest shopping centre schemes under construction in Poland are Galeria Mlociny (76,000 m2 of GLA) in Warsaw and Galeria Pólnocna (64,000 m2 of GLA), also in the Polish capital.

>50%
Over half of shoppers check offl ine shops and shop online. Even more (60%) declare price checks in regular collection and wait with purchase for sales.

2.5 times
The purchasing power of inhabitants of Warsaw, particularly in terms of spending potential for fashion is very high, almost 2.5 times the average for Poland.

ARE WARSAW SHOPPERS ABOUT TO REDISCOVER THE HIGH STREET?
Warsaw shoppers are addicted to shopping centres, but could that be about to change?

Warsaw’s high streets are changing, according to Magdalena Fratczak, head of retail at CBRE Poland. ‘Food and beverage operators are expanding fast on the city’s high streets, creating new footfall,’ she says. ‘Increased shopper numbers will attract those higher-end and aspirational brands that prefer not to take space in shopping centres.’

Fratczak cites Hotel Europejski – located on the Krakowskie Przedmiescie close to the Metropolitan
office building – as a case in point. As more top brands move onto the main shopping high streets, the streets between them will fill up, she adds. ‘Warsaw residents have quite high purchasing power and they are ahead of their counterparts in other Polish cities. They are trendsetters so I predict this could happen soon,’ she adds.

Not everyone agrees. Dominika Jedrak, director of research at Colliers, is not so sure. ‘Warsaw high streets are not a destination for high-end brand expansion, we have some brands but they are mainly based on franchise or license,’ she says.

Another problem is the ownership structure, adds Jedrak: ‘Most high streets units are owned by the city authorities. They have no strategy for high street tenant mix and international know-how to manage the stock of units.’

At the moment, according to Jedrak, there are only some ‘micro locations’ of high-end brands, located mostly on Mokotowska Street (which has luxury brands only, no chain stores), Vitkac department store on Bracka Street (Louis Vuitton), and areas near Metropolitan Office Building (such as Versace, Prada
which are multi-brand stores).

DIRECT ENTRY VERSUS FRANCHISING
Foreign retail brands are pulling out of the Polish market after failing to gain sufficient franchise support. UK fashion brand Next exited Warsaw some years ago and Dorothy Perkins and Top Shop have followed this year. All three brands opened only in Warsaw’s Zloty Tarasy mall, with Next taking a small 400 m2 retail unit, less than half the size of a typical Next retail space in its home country of the UK.

Warsaw shoppers familiar with the UK brand expect to see the retailer’s full range, not a small selection, according to Magdalena Fratczak, head of retail at CBRE, Poland. ‘I urge new brands to enter Poland directly, and Warsaw is a good entry point, not put their brands in the hands of franchisees who will often not invest enough marketing spend to raise awareness of the brand,’ she says.

BRAND VISIBILITY
‘If a brand wants to make a real success of a market like Poland, which has 30 million people, it needs to support it directly, not indirectly through franchisees or license. Only a brand can really control its own marketing, development and expansion into the right retail space. It’s not enough to bring in a brand
and expect consumers to react positively; that brand needs to be given visibility. Not all brands are as strong as H&M or Zara,’ she stresses.

Landlords also benefit from working directly with the mother company, she adds. ‘Often landlords can negotiate a better rent with the brand owners.’