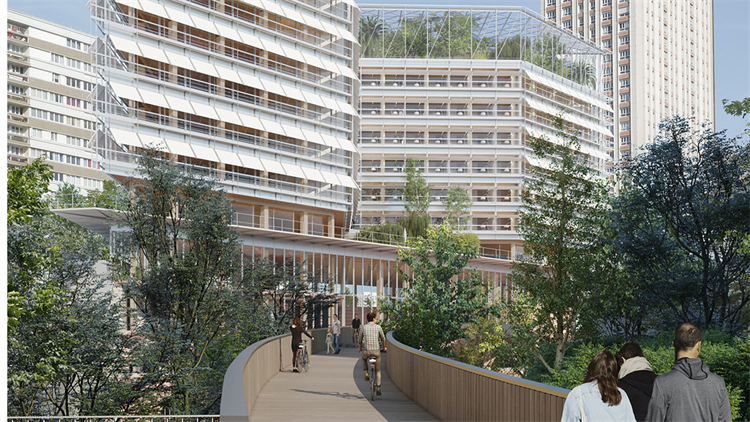 It’s no secret that specialising in retail real estate investment today requires both an extremely expert eye, and a strong stomach for the potential plot-twists ahead.

Vacant lots proliferate not just in down-at-heel neighbourhoods, but on some of the most important high-streets across Europe. The mantra of location, location, location has long-ceased to be enough to guarantee the business case for landlords and tenants alike.

Yet there is an alternative asset type which not only thrives in a wide range of ultra-urban locations – but also has a wall of money chasing it. One of real estate’s newest asset classes, last mile has emerged as property dynamite in the past five years, propelled by the rise and rise of ecommerce.

As has been widely reported, the global pandemic has collapsed timelines for the further acceleration of online shopping take-up in nearly all global markets. Leading the bloc for ecommerce, 33% of UK sales went e-tail this year and even if the coronavirus played its part, consumers today show few signs of changing their ways.

Ecommerce trend
Online purchasing worked well during the lockdown, and it fits with busy lives moving forward – so much so that Jon Sleeman, head of EMEA logistics & industrial research at Jones Lang LaSalle, suggests that an average ecommerce penetration rate approaching a quarter of all retail sales in the UK is likely to be the new normal from as soon as next year.

While out-of-town and motorway-side warehouses have amply supported ecommerce trends in recent years, the acceleration of the sales channel – and the vogue for same-day deliveries and even more rapid services – mean that 3PL players in particular need more and more strategic bases in city centres.

As the sun sets on the usefulness of some retail assets, can a transformation to last mile carve out a new future for obsolescent properties? Maybe, says Sleeman. ‘It sounds obvious, but logistics functions work best in warehouses, so it’s not enough for an asset just to be centrally located,’ he notes. ‘However, some retail formats – such as retail parks - are more ripe for conversion, and we’ve seen a few recent deals targeting this property type, especially in the UK.’

Transformational
Earlier this year, logistics giant Prologis bought the Ravenside retail park in Edmonton, North London, for £51 mln (€56 mln). While at time of purchase, only one of the seven units was empty, with the remainder still occupied by the likes of Argos, Carpetright, Mothercare, Wren, Tapi Carpets and Wickes, the Prologis plan is to convert the spaces to last mile warehouses as they become vacant.

Similarly, in May, Amazon bought a former retail park in Mill Hill for £65 mln, with insiders suggesting they will build a multi-storey distribution facility on the site. Amazon has also inked a deal to pre-lease a former Toys-R-Us store in Croydon as a warehouse space. ‘The transport and manoeuvring aspect is important for logistics, and retail parks tend to be better planned around accessibility than other urban retail types,’ Sleeman underlines.

Still, last mile landlords and tenants, with strict location-based criteria, are becoming increasingly imaginative with the spaces they occupy – and increasingly sophisticated in their dealings with local authorities.

Sleeman notes that parcel group DPD took over a former Transport for London depot in über-central Westminster two years ago, with an all-electric fleet of vans to meet future Ultra Low Emission Zone (ULEZ) requirements in the UK capital.

This use of atypical spaces may define the industry in the next few years to come across Europe’s densest hubs, where space is at a premium, and build-to-suit isn’t always possible. Elsewhere, firms are looking at building upwards to beat the space race, with Chetwoods recently appointed by Gazeley to develop G Park London Docklands, the UK’s first three-storey logistics facility.

Appealing
Despite its complexity and the ever-increasing competition for assets, last mile is clearly rising up the priority list for many investors today, with a significant number of names currently pivoting towards the segment from the retail real estate space.

The biggest players include Blackstone, which established a pan-European last mile platform called Mileway in September 2019, two years after divesting its logistics platform Logicor for a record €12.25 bn to China Investment Corporation. In a typically timely play from the private equity giant, Mileway is targeting €8 bn of last mile assets across the bloc, and recently boosted its growth plans with the appointment of Kevin Muscat from Patrizia as head of transactions as of 1 October.

However, it’s the repositioning of the likes of Meyer Bergman and Thor Equities which is likely to really resonate with investors that have traditionally favoured retail. Just this May, Meyer announced the launch of Crossbay, which will seek to amass €2 bn of European last-mile assets, with a focus on single tenant assets in gateway cities. Headed by Marco Riva, who led more than €2 bn of deals while at Logicor, Crossbay is an extension of Meyer Bergman’s urban mixed-use strategy which has managed more than €8 bn of assets across Europe.

Meanwhile, Thor Equities, ostensibly spooked by headwinds in the retail property space, launched ThorLogis in 2019, with a debut European deal near Amsterdam. ‘Logistics benefits from the same fundamentals associated with traditional retail, a sector Thor is deeply steeped in,’ said Thor’s managing director of European acquisitions, David Hunt-Cuadrado, at the time.

By the end of last year, Thor had further boosted its logistics credentials through a significant joint venture with Morgan Stanley, picking up a portfolio of UK logistics assets for €286 mln from UK logistics specialist Segro.

New entrants
Arvi Luoma, co-founder of Blackbrook, a new pan-European fund focusing on ‘mission-critical’ assets, says his firm is also interested in the last mile space. Launched earlier this year, Blackbrook plans to build up a portfolio comprising at least 70% industrial and logistics properties, and executed its debut acquisition in September – pouncing on a modern last mile scheme in Denmark.

Says Luoma: ‘It’s a challenging acquisitions environment. There’s a lot of money chasing very straightforward, long-income opportunities, and there’s not much core plus or core plus plus available. But we’ve been reviewing a lot of deals over the summer, and have a couple of projects in our pipeline which we hope to be closing in the next couple of months.’

Adds Luoma’s partner, Gordon DuGan: ‘We see the current crisis accelerating a number of trends that were in the property world globally. Eventually this is to the benefit of industrial real estate, as people see that supply chains need to have a bit more redundancy in them and require a little more space for stock.’

According to Luoma: ‘It has long been noted that Europe has a shortage of last mile and logistics assets. E-commerce on the continent has lagged the UK in terms of deliveries. The current climate is likely to push forward logistics development, along with more businesses using the hub and spoke strategy of warehousing and distribution. Another aspect is the speed of delivery – if everyone is at home, people demand things more quickly, and this becomes self-perpetuating as it becomes the accepted norm.’

While Luoma’s firm is also considering speciality retail and even hospitality – eventually – it’s the strategic logistics properties which really seem to be capturing the mood of the moment. ‘Last mile is still a new asset class,’ he underlines. ‘The rents are very high in terms of logistics… in the UK, we’re looking at £20 rents instead of the £6 or £7 you’d expect for warehousing.

'But last mile is distinguished by the inherent value of the land, which is why rents aren’t that dissimilar to a retail box. I do believe we’ll see a lot of tenants taking on these kinds of projects themselves going forward – the likes of Amazon – so it just remains to be seen how compliant planning authorities will be in the ultra-urban locations which will increasingly be in demand.’

In terms of retail to last mile conversions, Luoma remains cautious. ‘We wouldn’t take that on as a speculative risk, but would work with a tenant which wanted to do that,’ he said. ‘However, I do believe that a lot of the retail sites which are up for review right now will be home to last mile schemes in 10 of 15 years – but rather than refurbishments, they may well simply have been bulldozed.’