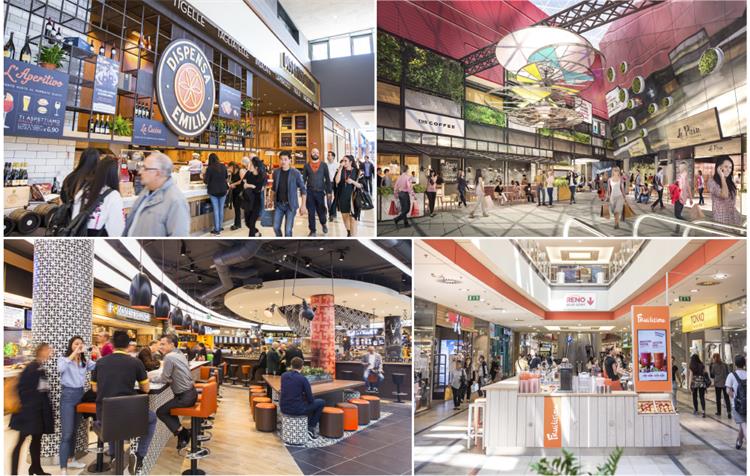 ECE’s ‘We Love Food’ concept is all about meeting growing appetites for food service in shopping centres, as well as serving customers with great F&B spaces, right across the portfolio.

While paying attention to food and beverage (F&B) provision in shopping centres is no longer optional, the quality, range and originality of the concept can make all the difference, according to Jonathan Doughty, Global Head of Foodservice at ECE.

‘If we treat them right, “guests” are willing to spend a lot of money on F&B in a mall,’ said Doughty. ‘In general, it isn’t difficult to get a good meal now in a shopping centre. However, in my view, the 3 E’s are often missing and guests do not enjoy an “experience”; they simply eat and may not return. At ECE we aim to arouse Emotions and provide Excitement and Entertainment.’

According to Doughty, there isn’t a blueprint for the ideal F&B space, although the 3 E’s serve as a ‘checklist’. He adds: ‘The whole Foodtopia project at MyZeil in Frankfurt embodies this.’

One of ECE’s latest and most exciting F&B concepts, Foodtopia is the name given to the brand-new dining and entertainment area currently being shaped in ECE’s Frankfurt centre, MyZeil. Around a year before its opening, this stand-out F&B space is inspired by the retail concepts and vivid atmosphere of a market hall.

‘If we treat them right, guests are willing to spend a lot of money on F&B in a mall’

From urban-gardening elements to a bespoke vintage style, it boasts an outdoor terrace facing the Zeil shopping promenade to add a wow factor, while the redesigned western terrace with sunroom will house food services and enjoy incredible views of the Frankfurt skyline.

‘The high occupancy rate is an overwhelming success. I’m delighted that our new food service and entertainment concept for MyZeil has been received well by the market and that we were able to convince so many exciting tenants of Foodtopia,’ said Steffen Eric Friedlein, managing director leasing at ECE. ‘Foodtopia will be a special and unique experience. We will practically reinvent food services at the centre – and create a perfect place for leisure, dining, shopping, and having a good time.’

At the start of this year, ECE revealed a few new names that have signed up for the scheme, including Friends&Brgrs, opening their first location in southern Germany, a restaurant of Sander Group, La Maison du Pain, Dean&David, ALEX, COA, and the premium cinema Astor Film Lounge. With over 80% of the space in Foodtopia now leased, it will offer customers everything from breakfast in the morning to cocktails late at night when it opens in spring 2019.

ECE’s recent openings further demonstrate this commitment. In March 2017, the launch of Adigeo in Verona delivered not only more than 130 shops but a unique mix of F&B providers.

Then in September, the new F&B area FoodSky on the top floor of Europa Passage Hamburg was unveiled after a construction period of just nine months. The scheme brings together 15 food retailers with seating for 400 guests, plus another five restaurants with seating for 600.

Friends & Brgrs, EssBar, Palacios, ­Fisch&Grill, Vincent Vegan and O-Street are just a few of the concepts enriching this extraordinary mix, proving that the 3 E’s are essential.

Bright young F&B brands are finding opportunities to grow with ECE, as dining areas are refreshed and expanded to embrace ECE’s ‘We Love Food’ concept.

Fresh juice bar Fruitisimo, founded in the Czech Republic by entrepreneur Jan Hummel, is one such example.  After expanding into five of ECE’s centres across the CEE over the last few years, it’s now planning to spearhead growth into Germany hand in hand with the shopping centre giant.

‘Over the past few years, Fruitisimo has gone from a small local business to a rapidly expanding mid-sized company which now operates in markets around Europe,’ says Hummel.

‘In 2008 we began operations in Slovakia, our first foreign market, and in 2016 we launched our first fresh juice bar in Budapest, Hungary. In 2017, Fruitisimo attracted significant investment which has allowed us to accelerate our expansion plans and develop new markets.

‘We now operate over 80 stores across Central and Eastern Europe and are entering more European markets in the upcoming months.’

Part of the brand’s appeal is the flexibility of its unit types, which vary from kiosks and caravans, to full cafes and café bistros, all with the same distinctive branding.

So what’s the brand’s secret sauce?  According to ­Hummel, it’s all about the experience. ‘We are not about the fastest mixers or most powerful juicers. We are about people. We love what we do and want our customers to experience that on every visit.’