Edinburgh's answer to the city centre of the future 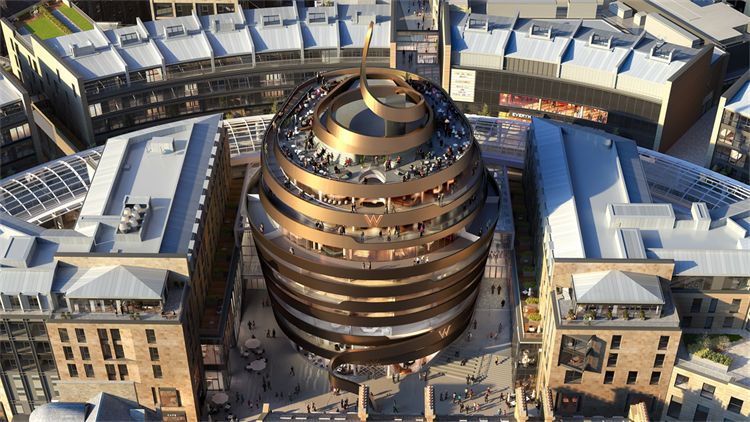 Edinburgh St James is bang on trend with its mixed-use development that is designed to be value-additive to the Scottish capital city and ahead of the curve in getting brands to work together for collective positive outcomes. But as construction of the 850,000 square feet scheme gears up for completion, time will tell if there is sufficient demand in Edinburgh to support the entire city centre.

A huge question mark hangs over the retail industry across the length and breadth of Europe: what is the future of retail, leisure and urban living in prime city centre locations?

While there’s no one-solution-fits-all approach, various mixed-use developments across the region are pushing the boundaries by creating compelling experiences, curated to encourage even online consumers to engage more actively with diverse brands in physical spaces. Edinburgh St James stands out as a prime test case for a futurist ideal of city centre retail, living and leisure experiences.

More than £1 bn (€1.2 bn) has been invested in this innovative scheme that’s set to rejuvenate and revitalise the east end district of the Scottish capital for locals and visitors alike.

TH Real Estate – rebranded as Nuveen Real Estate in early 2019 – had its plans for Edinburgh St James approved by Edinburgh’s planning authority way back in 2009. Those plans set out to demolish the then existing shopping centre and New St Andrew House – and replace them with a hotel and shopping galleria.

But with a 15-year timescale from the inception of Edinburgh St James to full completion in 2021, this scheme is more than a mixed-use real estate project ready to compete in the internet age.

In many ways, Edinburgh St James has had to embrace very forward-focused innovative thinking and fresh approaches to what constitutes city centre culture. And crucially in the new era of urban mixed-use, the scheme’s real long-term value drivers are arguably likely to come from brands interacting with a stronger focus on solid partnerships rather than just competition.

‘We set the brief for this development in 2007, and at the time, mixed-use development was not something that people did,’ says Martin Perry, director of development at Edinburgh St James. ‘People built office complexes and shopping centres back then and rarely blended the uses at all.’

While innovations in European retail and mixed-use developments are often influenced by advances in North America, Perry says that the Edinburgh St James development team found inspiration from experiences in Asia.

‘Most of our concept thinking came from trips to the Far East,’ he explains. ‘We went to Japan and Hong Kong to understand how to build a comparable density and retail it – and how to get retail to blend with leisure and other commercial uses. They do it so well, particularly in Japan.’

However, given the scale and projected timeframe for Edinburgh St James, explains Perry, it was clear that there was a need for a wholesale cultural rethink of retail and mixed-use developments. The aim is to enhance the overall Edinburgh city experience, and not to take a potentially detrimental approach by simply replacing old with new offerings.

The focus on the tenant mix aspires to attract many new names into Edinburgh city centre, but that willm sometimes come at a cost to the city. Zara on Princes Street, for example, will be replaced with a mix of Inditex brands – including a Zara flagship store but adding in Bershka, Pull & Bear and Stradivarius – at
Edinburgh St James.

‘It’s a little sacrifice to the city that’s replaced with all four brands, the latter three being new names to the whole of Scotland,’ he says. ‘We’ve left enough cornerstone fashion retailers in the rest of the city to make sure the retail circuit works,’ Perry adds.

The push to get new brands to set up in Edinburgh does not mean that Glasgow is the enemy, he says. ‘The enemy is the complacency of allowing people to do online shopping at home and not trying to get people back into the high street.’

That’s where a focus on supporting the future of the high street in Edinburgh is the driving force behind the marketing efforts at Edinburgh St James.

To train staff to take on the challenge of delivering customer service and hospitality high standards, Edinburgh St James has teamed up with The City of Edinburgh Council to create a dedicated training academy called FUSE. ‘FUSE nurtures people – out of school and university and following career breaks – into these sectors and supports them all the way through their training,’ says Perry.

Perry explains that the Edinburgh St James team has not focused on retail brands, but instead has considered all types of brands that would be relevant to visitors to Edinburgh St James. Early on it was clear that this wasn’t just another shopping centre as retail brands would account for just 50% of the overall space.

‘The alignment of Next to John Lewis, to the Everyman Cinema, to the W Hotel, to Native Land from a residential perspective,’ says Perry. ‘We looked at how consumers perceived brands and how they found themselves associated with particular brands that defined where they thought they wanted to be or perceived they wanted to be.

This is pretty much what the Instagram generation is saying – that there is a better virtual life than your real life.’

Understanding and exploring the whole range of people’sappetite for experience was crucial. Though consumers may not want to buy, wear or carry a premium item, they may want to be associated with those brands at a certain point, says Perry. ‘People might be carrying a Mulberry bag while they’re wearing a Primark top with a pair of Zara trousers and Kurt Geiger shoes,’ he adds.

While consumers have embraced a mix-and-match approach to the products they choose, inspiring brands to work together is an important part of the overall proposition for Edinburgh St James.

PARTNERSHIPS AS AN INNOVATION

Educating brands about partnership approaches involves hosting half-day sessions for them, getting them to talk about the scheme and encouraging them to work together, says Perry.

The challenge is to make the brands that are part of the development’s community think in terms of cooperation to enhance their overall offering. For example, W Hotel doesn’t have conference facilities, but the Everyman Cinema may have extra capacity to host events. ‘This is how two leisure brands can work together,’ he says. ‘You start to build up this concept that individual brands will do better by working together.’

By bringing the brands together to cooperate, awareness soon leads to commercial wins that potentially set the tone for even more interaction going forward. John Lewis, for instance, has supplied the furniture and kitchens for the marketing apartments in the residential part of the development.

Also, on the Edinburgh St James’ website, there is a partnership portal where content and ideas can be shared between brands. ‘What we’re trying to do is recognise that collectively we’re a much stronger and more profitable force than we would be individually,’ says Perry. ‘That’s genuinely innovative.’

That innovation in terms of cooperation is not just limited to the scheme’s partners. Stakeholders across the city and local economy – including the airports, airlines, cruise liner terminal, Edinburgh Castle and Marketing Scotland – are working synergistically to promote Edinburgh’s brand equity. ‘It’s about selling a city centre – a place to visit, to go shopping, to eat, weaving in everything the city has to offer.’

With nine event spaces at Edinburgh St James, there is ample opportunity to weave in the scheme’s physical space to take part in the major festivals that attract over 4.5 million visitors a year, in a city with 560,000 inhabitants.

The Edinburgh Festival Fringe is the largest arts festival in the world that takes place every August – attracting three million visitors this year – with ticket sales
exceeding those sold at the Olympic Games and the Fifa World Cup, according to Perry.

The nine event spaces could host 27 shows a week for free, says Perry. ‘We recognise that what we have to do here is simply provide the space. What we’re then doing is weaving the whole culture of the city into the retail and leisure fabric.’

With festivals taking place in the city covering much of the year, there is scope to increase footfall even further in the quieter months of February and March. As
Edinburgh St James offers covered space unparalleled across the city, new initiatives would feed into the city’s programme and benefit the scheme’s brands, says Perry.

Attempts to drive footfall to the physical space nevertheless still have to compete with the year-round convenience of internet shopping. To address this, Edinburgh St James has been developing a portal that covers the entire city centre’s retail offering. An app will be made available to customers before the scheme opens, says Perry.

‘It’s not a shopping portal, but more like Amazon,’ he explains. It would be a single-basket shop, which covers the whole of the offer in central Edinburgh. Customers would be able make one purchase across numerous retailers.’

While the technology behind the offering that blends online and bricks-and-mortar retail is straightforward, innovation can still take time to gain traction. ‘The challenge is broadening the offer to our partners, including retail, leisure, hotel and parking,’ says Perry.