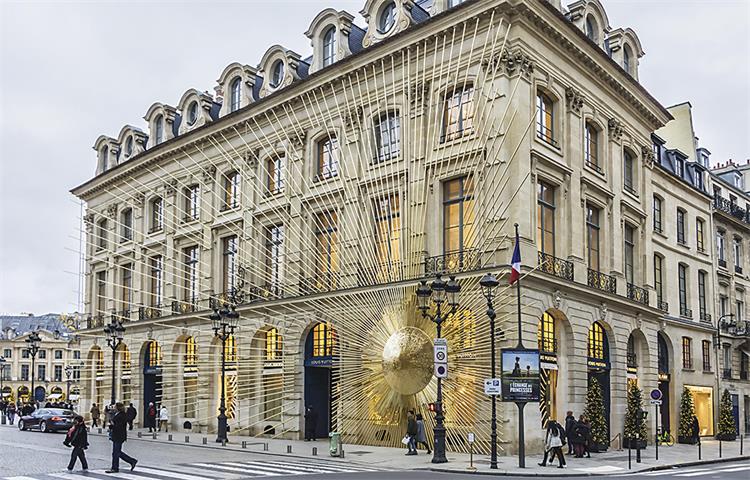 The unexpected bounce in luxury spending last year, with forecasts through to 2020 revised upwards, is giving luxury brands confidence to open new physical and flagship stores – the bigger, the better.

When Louis Vuitton’s flagship store (above) in Paris reopened last year at Place Vendome it was clear it was a game-changer. After a four-year renovation project, the iconic brand couldn’t have made a bigger statement with its brand new 3,500 m2 boutique, of which around 1,500 m2 is dedicated selling space.

Marking a stylish return to where the designer’s story began more than 160 years ago, the heritage interiors – including unique vintage pieces – also underline luxury fashion’s latest trend for bigger and more fabulous flagships.

According to Marie Hickey, retail research director at Savills, this is a key sign of the times. ‘In gateway territories, such as New York, London or Paris, there’s definitely a trend for luxury brands opening fewer, but more impressive stores,’ Hickey said.

‘The new flagships are in the best possible locations and they’re not just a place to go and buy a handbag or some perfume – they offer the whole brand experience. Apart from Louis Vuitton, we’re definitely seeing a lot more of that among the big European fashion houses.’

In parallel, while Italian and French brands are continuing to dominate the scene in terms of brand origin – taking a 27% and 24% share of all European openings in 2017 – they are also focusing on emerging markets and conquering new territories, Hickey noted.

‘One reason for this trend is due to increasing arrivals and luxury spend by Chinese tourists right across ­Europe,’ she said.

Chinese consumers accounted for 32% of luxury spend globally in 2017, up 11% from 2016 – consolidating their record spending figures worldwide.

Tellingly, this trend is expected to continue for virtually another decade. According to Savills, Chinese arrivals across Europe are expected to grow by 207% by 2025.

‘While last year’s good figures in the UK, for example, were in part due to the weak pound, it’s clear that there are some long-term dynamics in the trend,’ Hickey said.

‘Affluence continues to grow in China – and it’s a huge country with a massive, and growing, population.

‘Approximately 10% of Chinese nationals now have a passport – if that just doubles the results would be phenomenal.

‘While the wider Asia-Pacific region is usually the first destination market for Chinese tourists, some of the newly wealthy are definitely targeting Europe. The average spend might fall as more Chinese nationals travel, but tourist volumes will grow and the way they travel will evolve.’

The European market, of course, is not solely reliant on Chinese travellers, but international shoppers in general provide a big boost for the luxury market.

‘The United Nations World Tourism Organisation (UNWTO) predicts an annual compound growth of 2.3% in international tourism to Europe 2017-2030, with 744 million tourists arriving by 2030, accounting for 41% of global trips.’ Hickey said.

‘Another nation of shoppers to watch may well be India – with an increasingly wealthy middle class and large population.’

The effects of e-commerce on the sector are yet to be felt, said Hickey, but its impact will increase in the coming years.

‘E-commerce will have a bearing on the luxury market, although there’s still a view that the bulk of luxury sales will take place in store,’ she said.

‘More generally, brand sites help raise awareness about the fashion house – and may bring more customers into the stores. Retailers generally have also become more relaxed about whether the final transaction takes place online or offline.

‘One aspect of luxury shopping is that many customers have concerns about authenticity when buying online – so they like to come into the store. There’s also the added cachet of buying your Chanel handbag in the flagship store in Paris. But as webshops evolve, this may change.’

Looking ahead, it’s clear that luxury shopping has a fabulous future, with plenty of innovation and granularity defining the sector.

‘Another hot trend is luxury names opening pop-ups –not necessarily to test locations, but more as a marketing exercise to highlight product launches or create a buzz around a particular collaboration,’ Hickey said. ‘That will definitely be something to watch this year.’